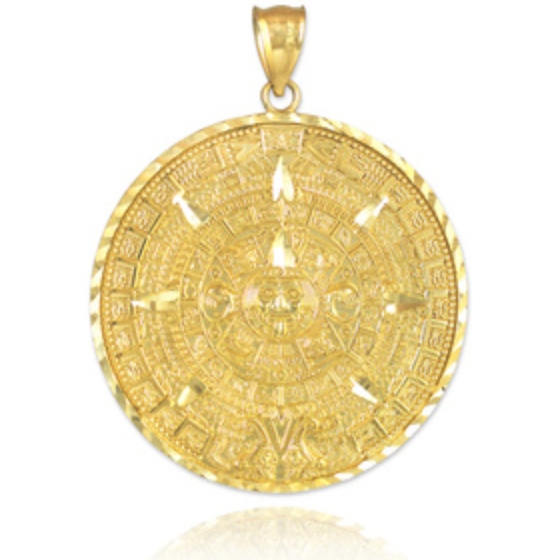 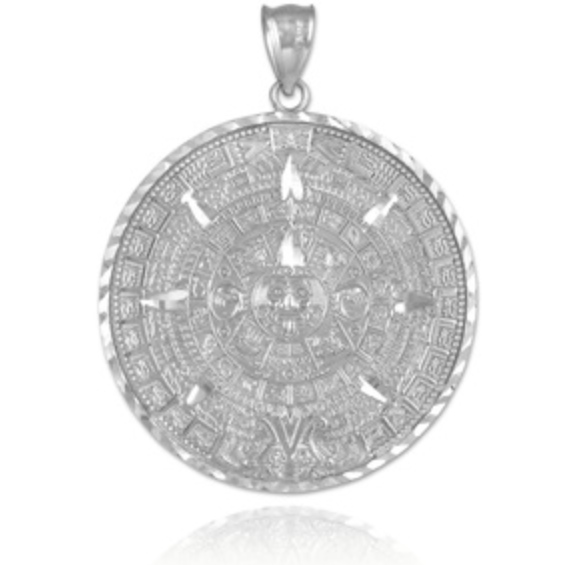 This well-crafted pendant has an amazing amount of detail and design to replicate the original sun calendar stone. The diamond cut will accent this pendant to give it that much more glitter and shine.

The central figure in this pendent is shown holding a human heart in each of his clawed hands, and his tongue is represented by a stone sacrificial knife, expressing the need for sacrifices to allow the sun to continue moving across the sky.

The four squares that surround the central deity represent the four previous suns or eras, which preceded the present era, 4 Movement. Each era ended with the destruction of the world and humanity, which were then recreated in the next era. There’s 4 Jaguar, 4 Wind, 4 Rain, and 4 Water. Each ending an era. Among those four squares, there are three additional dates, 1 Flint, 1 Rain, 7 Monkey, and a Glyph, suggesting that these dates may have had both historical and cosmic significance, and that the diadem may form part of the name of the Mexica ruler Moctezuma.

The calendar stone image has also been adopted by modern Mexican and Mexican American/Chicano culture figures, and is used in folk art and as a symbol of cultural identity. The brilliant Aztec Calendar pendant is a unisex piece that honors the great history and culture of ancient Mexico. It might be the most famous work of Aztec sculpture.